A Recipe for Elizabethan Trifle

May 02, 2020
When I found a recipe titled 'Trifle" in the Elizabethan cookbook The Good Huswife's Jewell, written by Thomas Dawson in 1596, I imagined a huge bowl of custard, thick cream and berries. Maybe a few nuts. Some beautifully-coloured pudding I could imagine Tudor merchants spooning greedily out of an ornate glass bowl, being careful not to spill any on their elaborate ruffs and doublets.

A Tudor trifle is something altogether different. 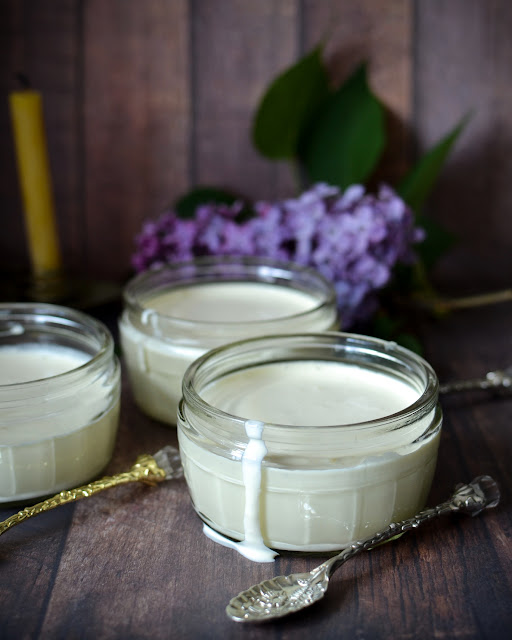 But don't be disheartened, because it's incredibly delicious.

"Take a pint of thicke creame, and season it with Suger, and Ginger, and Rosewater: so stirre it as you would then have it, and make it luke warme in a dish on a Chaffingdish and coales: and after put it into a silver péece or a bowle, and so serve it to the boorde." (1)

The recipe is easy to make, and takes just a few minutes. I used extra thick double cream, because it's slightly watered down with the rosewater. The idea is to serve it lukewarm, so only just warmed. I tried it warmed slightly and also cold, and I actually much preferred it cold. If you'd like to be historically accurate though, go ahead and warm it for a few minutes in an oven or heat gently in a pan before decanting into ramekins (I didn't have the silver pudding dishes mentioned in the recipe).

I've used rosewater syrup, because that was what was available to me - and I've scaled down the ingredients. A pint of thick cream would have been far too much.

The flavour is soft and fragrant - you can taste the rose and the ginger, which since trying this, are one of my new favourite combinations. But as it is made using thick cream, it is very filling and rich. I'd suggest that the quantities in the recipe below serve six - so six half-full, small ramekins. If you're feeding fewer people, halve it again to serve three.

Method
Pour your double cream into a bowl - a large cereal bowl would do - and then stir in the rosewater syrup, caster sugar and ginger. Stir it together.

If you'd like to eat your Tudor trifle cold, serve it into small ramekins, dividing between six portions.

If you'd like to eat it warmed, as the Tudors did, either warm the trifle in a small saucepan until just lukewarm or bake it in the oven just for a few minutes, carefully removing with oven gloves.

Have you tried this recipe? Let me know what you thought, and take a photo and share with me on Instagram @lovebritishhistorypics - I'd love to see!