Aboard The Matthew in Bristol, a Fifteenth Century Exploration Ship

May 05, 2020
As a history fan - especially Medieval and Tudor history - if you were to look at my bucket list, getting the chance to board a fifteenth-century Tudor ship that sailed all the way to America would be pretty high on it.

So it's a good job that you can actually go and do this.

The Matthew is a replica of the ship that sailed successfully to Newfoundland in 1497, captained by the Venetian-born explorer John Cabot. 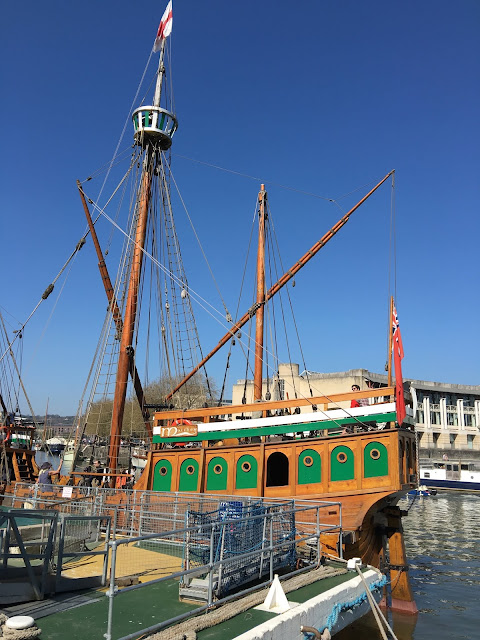 It sits at Bristol Harbour, is free to board and you can get a real sense of what life on a Tudor ship would have been like.

The Matthew is a caravel, which is a type of ship that was fast in the water and easy to turn and steer through the waves. It's thought that before it gained fame as the ship that travelled across the Atlantic, it was used as a goods ship, bringing supplies like wine into the port of Bristol. After the Newfoundland expedition, she was then owned by a Bristol merchant called John Shipman, where she once again carried goods for trade to Ireland, England and Biscay. The ship was designed and developed as a replica of Cabot's ship in 1994-1996, to coincide with the 500th anniversary of Cabot's expedition, in 1997. (1)

Henry VII had given his consent for Cabot to sail in a declaration written in Latin on 5th March 1496, which 'empowers John Cabot, of Venice, and his sons Lewis, Sebastian and Sancho, to make a voyage of discovery, at their own expense, under the King's flag, and to take possession of new countries in his name.' (2) This began a new Golden Age of exploration under the Tudors, which culminated in the settlement of Virginia by Walter Raleigh under Elizabeth I. 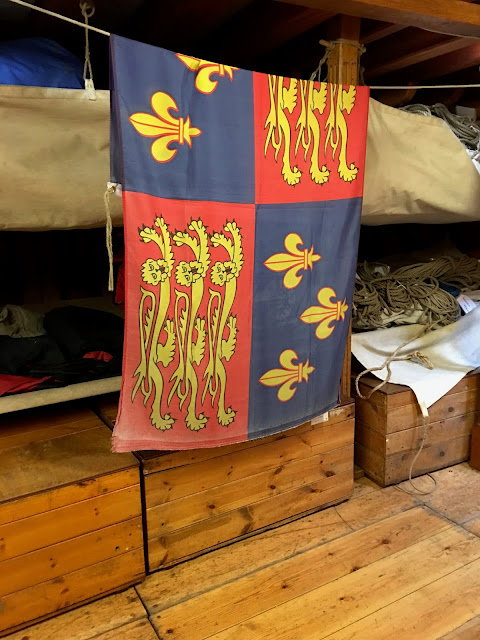 The first thing you notice when you board is the size of the ship. That it would have been large enough to hold twenty men along with all their food, ale and other supplies is astounding, given the cramped conditions below deck, which has beds and other storage. As you descend the narrow hatch, you have to be careful not to bump your head or lose your footing on the ladder, a much harder task I reckon in the middle of the swaying Atlantic.

Above deck, you can imagine someone having to scamper up to the crow's nest to look out for obstacles or changes in the weather or tides up ahead. All the woodwork and the beautifully decorated ornaments - the space around the portholes painted a vivid shade of Tudor green - gives you such a deep respect for the people who worked on building this replica, so we could all sense what early Tudor sailing would have been like. 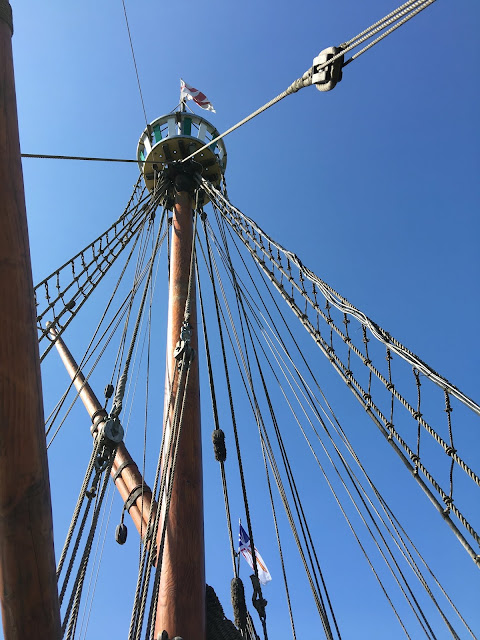 You can climb freely around the ship - to the front, looking out at the entrance to the harbour - and there are experts onboard that you can ask if you have any questions. Every time I travel to Bristol I jump aboard, just to get a feel for what voyaging would have been like for our Tudor ancestors.

The Matthew is currently closed to visitors due to the Coronavirus outbreak. These pictures are from a visit I took in 2018. Otherwise, the ship is free to board, but please do consider giving a donation onboard to help them continue the upkeep and maintenance of the ship.

Have you been aboard The Matthew?
What did you think? Let me know in the comments below!