July 07, 2020
What did the Tudors eat for breakfast? Well, it was hearty, filling and it wasn't quite breakfast as we know it today...
I've just finished reading a brilliant book called How To Be A Tudor by Ruth Goodman. In it, the author discusses the minutiae of Tudor life - what the Tudors wore, how they greeted one another, how they worked and showed each other respect, how they married, how they slept - and how they ate. And one of the things that made me jump to attention was that they would have eaten bacon and eggs for breakfast.
I mean, bacon and eggs.
We've been eating this combination for around five hundred years, at least, and it still forms the basis of breakfast today in greasy spoon caffs, roadside food trucks and up-market hotels that overlook posh, private beaches. 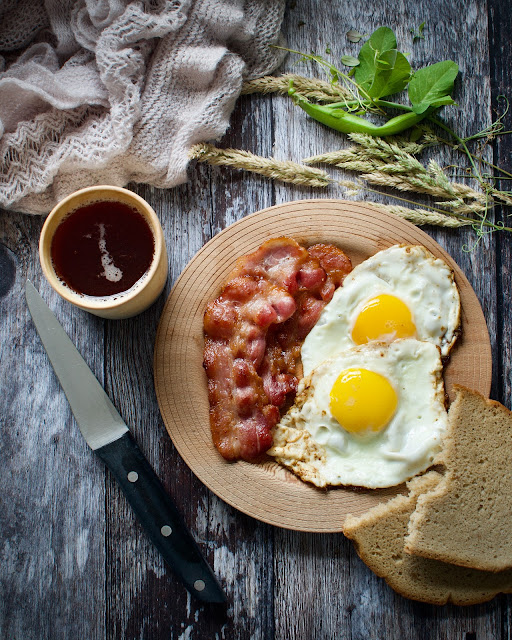 The idea is, says Ruth, that it was filling and full of calories ready for people to plough fields, turn soil and shear sheep. And it was generally eaten not when first waking up, but as a break from the morning's work. Tudor people working the fields - this was usually, but not exclusively, men - would wake up at around 4am and get in a good three or four hours' work before having something to eat, when they'd eat soup, potage (a chunky soup with root veg and grains) or good old fashioned bacon and fried eggs. Probably a little ale on the side, and perhaps a slice of bread, usually made out of either wheat, rye or oats - or a combination of the three.
Apparently, in higher social circles, bacon and eggs were frowned upon and considered the meal of a lowly agricultural worker, rather than a lawyer or courtier. But honestly? I'm with the farmer. The bacon would have probably been more thickly-sliced than in my photo, but still smoked and salty, with the silky soft yolks eaten as many still do today, dipped with the bread alongside. And don't freak out about the ale - it was less alcoholic and thicker in texture than what we drink today - and don't underestimate the flavour of malty ale alongside salty, smoky bacon. But if you're eating this before a shift at the office - or anywhere else, for that matter - it's best you skip the ale and brew yourself a tea or coffee instead.
Tudor Bacon and Eggs
Serves 1 hungry farm worker
Ingredients
2 tsp fat for frying - Tudors would have used lard, beef dripping or olive oil
3 rashers of smoked, streaky bacon
2 fresh eggs, preferably free range and organic
1 slice bread (I've used rye bread) with a little butter if you like
Method
Heat a frying pan on the stove and trickle in the fat or oil.
Add the rashers of bacon, cooking on a medium heat until cooked through and just golden on one side - turn over and finish cooking on the other side. Push the rashers over to one side of the pan, or, if you don't want them crisping up any further, remove them to a plate.
Straight away, crack the eggs into the hot fat and continue to cook until they crispen up at the base. Take a spoon and flick a little of the hot fat or oil over the top of the egg, to help it cook over the yolk and then serve with the bacon and perhaps a piece of buttered bread.
Breakfast, Tudor Style.
Liked this? You might also like my recipes for Tudor Marchpane, Tudor Trifle and Tudor Olives. Or there's a beautiful recipe for Henry VIII's (alleged) favourite tart, Maids of Honour.
Love the Tudors?
Also check out these:
11 Foods The Tudors Never Knew
What Really Made Henry VIII Obese?
The Murky World of Elizabeth's Pirates
Finding The Ancient Pubs of Reading, Berkshire