July 24, 2020
I don't know if you know about this, but there's a sixteenth century dessert that is kind of like apples and custard mixed together. And it's delicious.
It's called Applemoyse.
It's easy to make and it contains just a few ingredients. You probably have all or most of them in your kitchen cupboards right now. 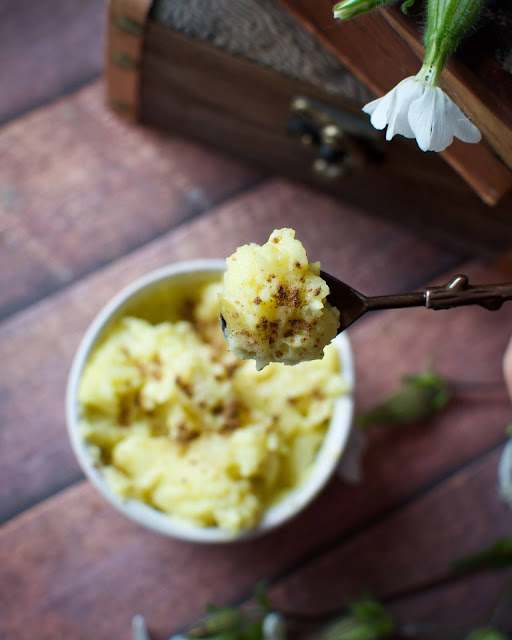 The earliest Tudor recipe I found for this comes from the book A Proper Newe Booke of Cokerye, first published in 1545. The Tudors would have served this with biscuits, or sprinkled it afterwards with ginger and cinnamon. Here's the original recipe:

Take a dosen apples and ether rooste or boyle them and drawe them thorowe a streyner, and the yolkes of three or foure egges withal, and, as ye strayne them, teper them wyth three or foure sponefull of damaske water yf ye wyll, than take and season it wyth suger and halfe a dysche of swete butter, and boyle them upon a chaffyngdysche in a platter, and caste byskettes or synamo and gynger upon them and so serve them forthe.

So first, I knew a dozen apples would make way too much. So I used three. This was enough for the amount you see in the photos, which three of us shared. For what isn't much more than a rich apple sauce, it was pretty filling. From what I've seen, damask water is essentially rose water so I've just added a drop of rosewater syrup and it turned out beautifully. I didn't have any biscuits or Tudor wafers to hand, so served it as it is, in a small dish. And from the recipe, it seems as if it's served warm, with no notes about cooling before eating, so that's how we served ours.
Loved it. Would be a good little pud to try in small dishes after a traditional Sunday roast or as a tea time sweet snack. 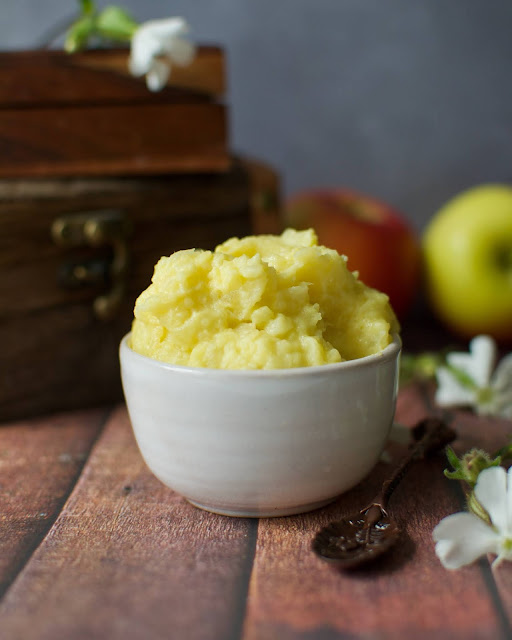 Tudor Applemoyse
Serves 3-4
Ingredients
3 apples (I used Bramley cooking apples but use whatever apples you like, or need to use up)
1 egg yolk
1 drop of rosewater syrup
half teaspoon sugar
1 tablespoon butter
ground cinnamon and ginger, to serve - alongside biscuits, if you like
Method
First, peel and core your apples and cut them into 2cm-ish chunks. Place them in a pan, slosh in some water and bring to a simmer. Cook until the apples are soft (test with a knife).
Once the apples are soft, drain any excess water (mine evaporated while cooking so I didn't need to) and mash them until soft. Take away from the heat. Stir in the egg yolk quickly (it will cook in the residual heat of the pan and won't turn into scrambled eggs) and then add the rosewater, sugar and butter. Put back on a medium heat and stir well, so all the ingredients combine, until you have a fluffy, yellowish pudding.
Serve in glasses or small bowls with a sprinkling of cinnamon and ginger - and some wafers or biscuits alongside for dipping.
Here's a video of me making it...
Have you made this recipe? Take a photo and tag me @lovebritishhistorypics on Instagram - if you do, I'd love to see it!
Like Tudor cooking? You might also like my recipes for my Anne Boleyn-inspired Tudor Apple Pie, Tudor Marchpane and Tudor Roasted Apples.