October 02, 2020
In 2018, there was a global challenge issued to recreate a recipe from a 1604 Oxfordshire cookbook, for Soul Cakes. The recipe was from a cookbook found from the household of Elizabeth Fettiplace, by coincidence one of the women I'm researching for my local history project because for a while she lived down the road from me.
It turns out that Soul Cakes were eaten since Medieval times, when they were baked and distributed among the poor or after All Hallow's Eve celebrations like plays, or music.
But there's still a lot of debate about what a Soul Cake actually is.
With a quick Google, you can find Soul Cakes everywhere. Some plain, some with raisins dotted within and some with eggs. Some are buns, some biscuits and others are more like scones.
It's amazing the different types of cakes produced from looking at one single recipe. 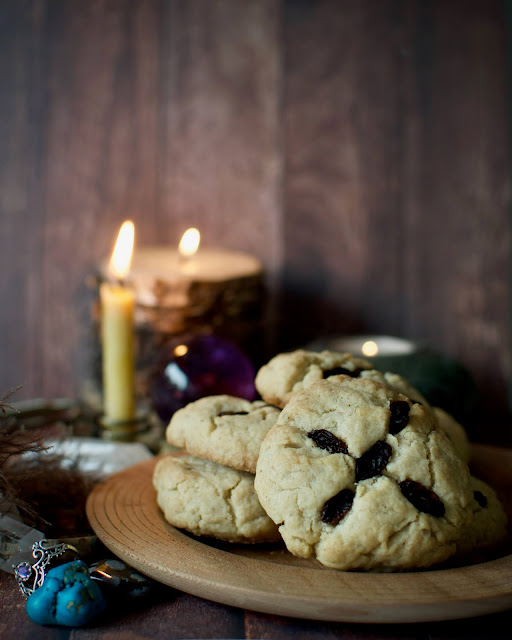 So what the heck was an original Soul Cake?
Here's the original recipe, from 1604, which makes it Stuart era soul cakes, but I'm betting this is how they ate them the year before at least:

Take flower and sugar and nutmeg and cloves and mace and sweet butter and sack and a little ale barm, beat your spice and put in your butter and your sack, cold, then work it well all together and make it in little cakes and so bake them, if you will you may put in some saffron into them or fruit.

Some people have reasoned that the cakes must be risen little puffy, yeasty buns because they contain ale barm, which is the froth on top of the ale, and thought to have worked as a rising agent.
Later recipes do have eggs in, for example in the nineteenth century, but we're talking about our friend Elizabeth Fettiplace in Oxfordshire in 1604. And there's no mention of eggs here.
And I think there's a reason eggs aren't in the orginal recipe. Eggs are rich. They add a velvety texture and silky softness to cake and cookie dough. They're for happy, indulgent celebrations like feasts and Easter. This time of year is a lot more dark and serious, when the veil between the world of the living and the dead is at its thinnest. I wonder if Tudor cooks would have wanted something a tad more frugal - for the symbolism of the bleak season as well as the fact that they were made simply to be given away.
And honestly, when you read the recipe more literally it sounds a lot like the way you make a shortbread. A dense, crumbly shortbread biscuit studded with sultanas arranged in the shape of a cross. The butter, flour and sugar - the main ingredients of a shortbread. Ingredients added in cold, as you do with a shortbread. The ale barm and a little sack is likely added just to help bring the ingredients together smoothly from the crumbly mixture you get up to that point. Nowadays people sometimes use a drop of milk.
Personally I don't think that Soul Cakes were (originally, anyway) fluffy, eggy buns. They were spiced and decorated shortbread, with the warmth of nutmeg and the slight tang of ale.
The cross is to remind us that it's not just a treat we're talking about here - each and every one given to the poor and eaten up had the power to free a soul from Purgatory, no less.
I did my bit. I ate three before lunch. Go me. You're welcome.
Tudor Halloween Soul Cakes
Makes 8
Ingredients
125g salted butter, at room temperature
50g caster sugar (you can use golden caster sugar if you like)
200g plain flour
half teaspoon ground nutmeg
scant quarter teaspoon ground cloves
1 tablespoon ale (try and get the froth off the top of it more than just the liquid)
Raisins, for decoration
Method
First of all, preheat your oven to 190ºC and line a baking sheet with greaseproof paper.
In a bowl, beat together the butter and sugar until smooth and then tip in the flour, nutmeg and cloves. Mix well - I used my fingers as you'll end up with a crumbly mixture. Now add the ale and stir - it should start to come together in a dough now.
Pinch off small balls from the dough, roll them between the palms of your hands until smooth and place them on the lined baking sheet. You are aiming for about 8 balls from this mixture - don't make them too big or they won't cook through in the centre. Press them down gently but firmly, to form little rough cookie shapes about 1cm-ish thick and, using a sharp knife, mark them with a cross. Gently push raisins into the lines in the cross to create the cross shape.
Slide into the oven and bake for 15-20 minutes, or until just starting to turn golden. Cool on a rack. You might find that as the shortbreads rise slightly, the raisins get pushed up. Just poke them back in while the biscuits are warm with the knife you used earlier.
Serve cooled.
Made these? I'd love to see! Post a photo to Instagram and tag me @lovebritishhistorypics. Happy Halloween!
You might also like my recipe for Tudor Roasted Apples - or a festive Marchpane!