Don't you feel like the winter season - with all its pine sprigs, holly and darker evenings - just begs for the warm fuggy smell of lemon tarts, fresh out of the oven? Or that sweet, cosy scent of almonds and roses wafting out of the kitchen?

Here are five recipes that you can make to satisfy whatever cosy, winter yule vibes that you have going on right now. I've made them directly from the Tudor sources and brought them to you, adjusted and tweaked for your modern kitchen.

Put a few of these out on the table and serve forth! 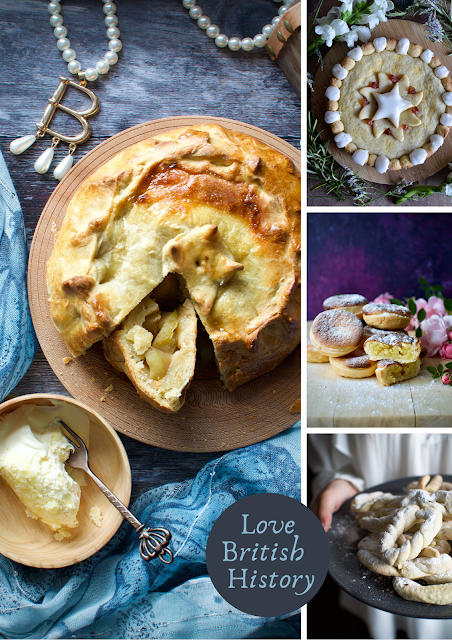 Marchpane
Did you know that Elizabeth I was gifted a lot of Marchpane, the Tudors' answer to Marzipan? It needed a  high amount of sugar in the recipe to make it, and so it sort of gave the message to the queen that you were wealthy and influential - and someone to be taken seriously. In one New Year's gift, she was given a replica of St Paul's Cathedral made out of Marchpane. While we're not necessarily that committed, one of these pulled warm from the oven and cut into small triangles would be a beautiful after-dinner treat.
Anne Boleyn's Apple Pie
Disclaimer: I don't know if Anne Boleyn actually ate apple pie like this, but I'd put money on the fact that she did. She famously craved apples during her pregnancy with the princess Elizabeth and if I was her, I'd be eating chunks of apple pie all day long. We know that the Tudors enjoyed clotted cream too, as it exists in recipe books of the period. If you don't want to make your own pastry go ahead and use a bought one. I won't tell.
Maids of Honour Tarts
Legend has it, that Anne Boleyn (yes, her again) made these for the young Henry VIII when they were, erm 'courting' and he was instantly hooked and named them after her job title in the present queen's household. Whether or not this is true, these are gorgeous little pies to make. I've used bought pastry for these - don't judge - but make your own if that makes you happy. My kids regularly demand trayfuls of these from me, so to speed up the process I use bought shortcrust pastry. It still tastes incredible. Kind of like a bakewell tart, sort of like a lemon meringue pie and also a bit like a cheesecake in the middle it's a zesty and sweet blend of flavours. Try it for yourself.
Soul Cakes
These are traditional cakes that were passed around at Halloween, but Soul Cakes shouldn't just be for Halloween. These cakes are rich with butter and spices like mace, cloves and nutmeg. They're studded with dried fruits and baked until crumbly. Plus, they're too good to be enjoyed only once per year. Bake up a batch and set them on your Christmas Eve table.
Jumbles
Jumbles are one of my favourite things to bake. They're twisty little pretzel things that are shaped and boiled a little bit before being baked. The rule is not to let them go golden, bake them just until they're pale and make a hollow sound when tapped. They're easier to make too, than you think they'll be. Get the kids involved. And don't they look gorgeous with that snowy topping of icing sugar? Not wholly authentic I'd say, but gorgeous with a cuppa.
Have you made any of these? Let me know what you think! For bonus points, share a photo to Instagram and tag me @lovebritishhistorypics and I'll reshare any I see.
You might also like:
7 Ways Being a History Lover Changes You Forever
Did Elizabeth I Pull Off The Greatest PR Stunt of All Time?
Sex and Sexuality in Stuart Britain - A Review