February 23, 2021
This post contains some affiliate links. This means that if you decide to click on a link and make a purchase, I may receive a small commission at no extra cost to you that goes back into helping me keep the blog running. Thanks for your support.
One rainy Sunday I decided to draw a woman who was the gold standard in how a warrior queen should behave. She negotiated with Vikings and got them to surrender and ruled the Anglo-Saxon kingdom of Mercia when her husband died. She held onto her power and never remarried.
I decided to draw Aethelflaed, Lady of the Mercians. 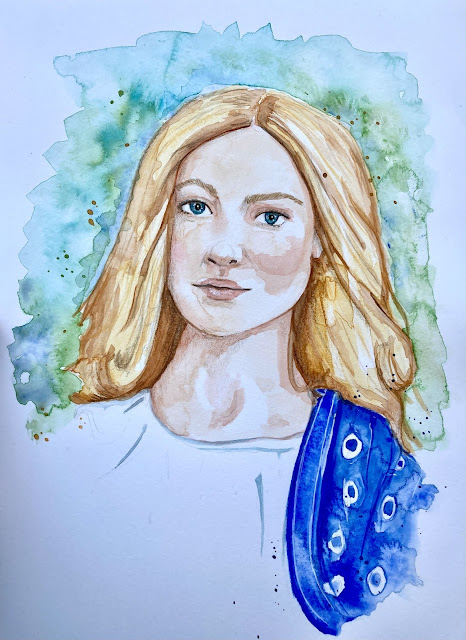 For such a powerful woman, two things were surprising. The first was, in all my years of reading history, I'd not come across her before last year. In the late 1990s I completed a history degree with a big section on Roman times and everything afterwards up to the Cold War: but Aethelflaed was never mentioned. Strange really, as she was kind of a big deal.
The second thing that surprised me was that there is no contemporary description of her. Nothing. We have a thirteenth-century painting in a manuscript which depicts her with blonde hair and rosy cheeks, but even that probably isn't accurate, having been painted three hundred years after her death. Thanks to Anglo Saxon historian Annie Whitehead by the way for confirming that there were no contemporary accounts of her appearance.
So I delved deep into Google.
I researched the average appearance of the Anglo-Saxons. Tall, fair to light-brown hair, blue or maybe green eyes. A long, slender nose (called a hyperleptorrhine nose) that evolved when humans originally spread out to the Northern Hemisphere and needed to adapt to breathe in the cooler air. Fair, pale skin - which supported the blonde/blue eyes idea. I ended up down an internet rabbit hole for longer than I'd like to admit trying to trace the average temperature around 900AD to find out if Aethelflaed might have had freckles from the summer sun, because I really wanted to give her freckles. Some sources say it was colder back then, others say it was warmer. In the end I left out the freckles.
I sketched out the portrait in pencil on A4 smooth Bockingford paper (glued on all sides to prevent warping), using a photo reference for the main features, and then tweaked the nose and eyes a little and smoothed the hair. To be fair, she still has a lot of bounce in her hair and I imagine in reality it may have been finer and flatter, but I also wanted to add energy to the portrait.
Once the pencil was sketched out I went in with the watercolour. I use Winsor and Newton professional grade watercolours in a small palette, and round brushes in fine, medium and large. I added the background colours (daubing wet watercolour on water-soaked paper) and then let it dry before painting the shadows and main colours of the face and hair. Once that was dry I painted on another layer of watercolour to add more tone, vibrancy and definition and then I left that to dry overnight. 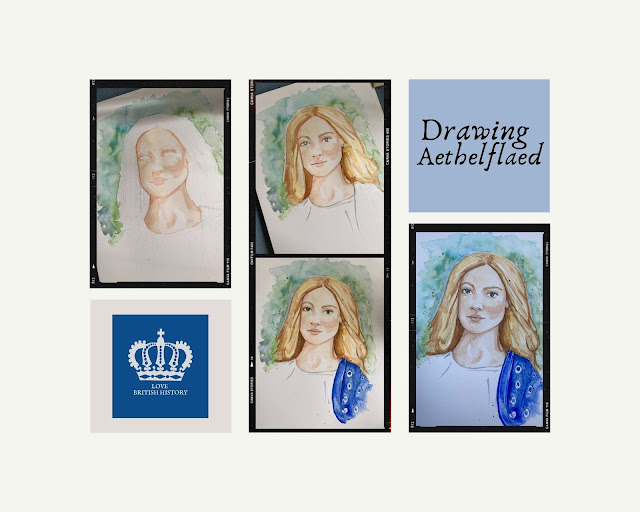 The next morning I added finer details and shading using coloured pencils. I find coloured pencils give me much more control for finer details than watercolour, which can bloom out, run or dry unevenly. I love the effect all these give - and it's why I use watercolours for all my projects - but I didn't want them involved in the final stage for this one.
Finally, I added rosy cheeks, more definition in the eyes and hair and flicked over splashes of paint to create energy around her. She's young here - late teens, early twenties' at most, so this is how she might have looked early in her marriage to Aethelred. I've taken the blue robe she wears in the thirteenth-century manuscript and draped it over her shoulder.
I can't say - no one can, unless we find an undiscovered contemporary portrait  - that this is exactly what Aethelflaed looked like, but it's probably a good enough start. Tall, strong in stature, fair with light eyes and long hair. She clearly commanded respect from both her people and her enemies and seems to have been a born leader.
What do you think? Let me know in the comments below.
You might also like my review of the book Women of Power in Anglo Saxon England.
Sources:
humanphenotypes.net (Anglo Saxon)
Aethelflaed: The Warrior Queen Who Broke the Glass Ceiling, BBC. Accessed 22 Feb 2021.