This post contains some affiliate links. This means that if you decide to click on a link and make a purchase, I may receive a small commission that goes back into helping me keep the blog running. Thank you for your support.

I knew for a long time that I wanted to draw one of my favourite historical figures, Anne Boleyn.

She needs no introduction, really. My husband grew up in Argentina, hates history and never read a history book in his life, but he knows who Anna Bollina is. Ask anyone the name of one of Henry VIII's queens and they'll most likely come up with Anne first. Her legend is steeped in mystery, maybe even a bit of magic - and it's generally accepted nowadays that she was probably innocent of the main charges against her and definitely didn't deserve to die on that scaffold in May, 1536. 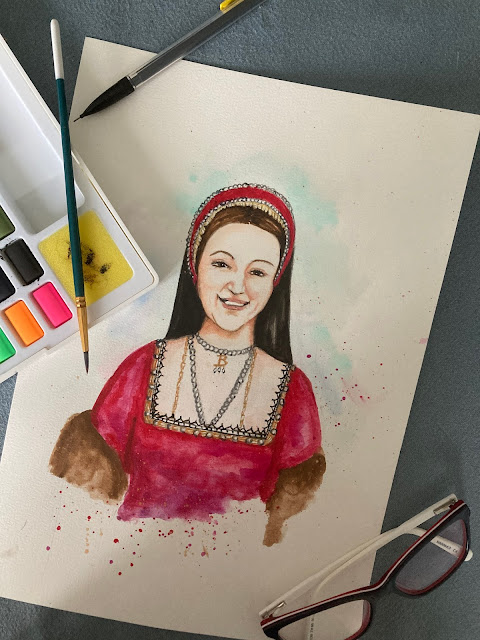 Actresses are still eager to play her role, five hundred years after her death, screened on devices Anne wouldn't even have been able to dream about. She has been immortalised by Shakespeare. People flock to the Tower of London, Hever Castle and Windsor to walk in her footsteps. There are entire websites, books, novels and social media accounts dedicated to her. And, in the gift shops, you can buy a mass-produced plastic replica of her famous pearl necklace with the dangling gold 'B' for under a tenner.

So what has made her so intriguing? I think Anne is so much to so many different people. To some, her role as an active, involved queen alongside her husband, her up to date fashions, outspokenness and ambition sets her out as a woman before her time. To others, she is a frustrating and depressing symbol of the bloodthirstiness of Henry's court, and maybe Henry's temperament - certainly after the 1530s.

There have been some really good modern drawings of Anne, by really skilled artists. But I wanted to achieve something a little more historically accurate, as a kind of experiment.

I wanted to get as close as possible to the real Anne. The sullen, stiff poses so typical of this era aren't what I wanted to achieve. After all, people smiled, gazed out of windows and burst into tears, too, in the sixteenth century.

I looked at contemporary descriptions of Anne and the handful of likenesses we have, knowing that there are very few that were drawn in her lifetime.

The famous (but not contemporary) depiction of Anne wearing the black dress, at the National Portrait Gallery. And the second very 2-dimensional portrait, probably a copy of the previous portrait, where she is holding a red rose. The more detailed 'lost portrait', where there is a very convincing case for this being a contemporary portrait of Anne, sadly lost to us in a fire. This painting seems to me much more likely to have been a fairer representation of Anne, and all the distinguishing features in other portraits and descriptions are there.

I looked at her medallion portrait, created in 1534. The small Order of the Garter painting from 1534. Elizabeth's 'Chequers' locket ring, which may depict Anne. From descriptions of those who set eyes on her, who said she had a wide mouth, 'swarthy' complexion and also those famous glittering 'black' eyes that were used to great effect. She was described even by a relative as being 'pretty enough' and so she wasn't a typical pink-cheeked English Rose beauty. Most of the portraits show her as having a large nose with a slight bump along the ridge and a downward tip, dark hair and a pointed, slight double chin. She was slim. And let's not forget that she was around 36 years old when she died. In Tudor terms, this was pretty much middle-aged.

I started to sketch out her features very lightly, with a BIC 0.7mm mechanical pencil. I used a reference photo of a model to get the eyes, nose and mouth in the right place, and then I started to tweak it. I thinned her lips and narrowed her chin and jaw. I lengthened the nose and added some wrinkles. I put in the slight double chin and the sixteenth-century clothing. And I gave her a smile. 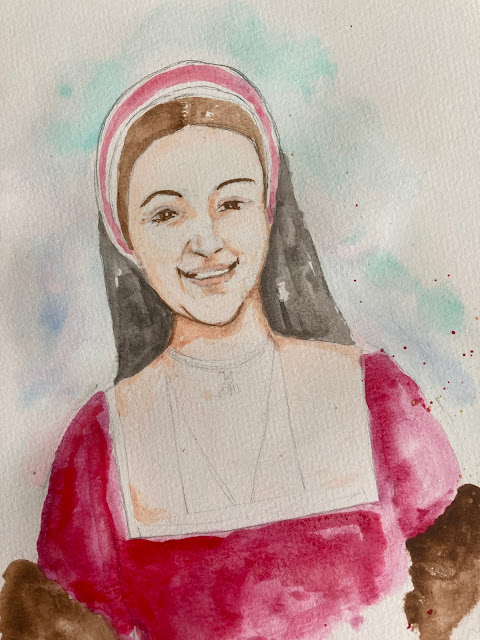 I layered up tones and base colours in Faber-Castell watercolours and then, when they were dry, went over them again this time with less water so I could build up the rich pigment in her dress and add detail around her face. I depicted her hair as a lighter brown - Elizabeth inherited Henry's red hair and so I think it makes sense that Anne's hair wasn't jet black or darkest brown.

I chose the red colour for the dress for two reasons. One: everything I've read about Anne gives the impression that she wanted to be noticed - she was flirtatious, loved court games and sported the latest fashions from France. A shrinking violet she was not. Red could only be worn by those of the highest social class. Don't tell me that when Anne became queen she never wore a red dress. I think she did. And two: I chose splashes of pinkish-red to mirror the portrait of her daughter, painted when she was a teenager, in that beautiful pink dress, holding a book. 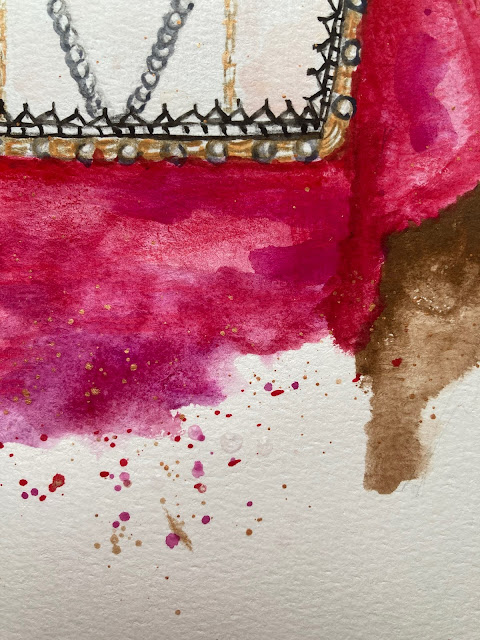 I always add splatters to my paintings - I think they add movement and dynamics and even give a magical look. Anne has red and gold splatters.

It was when I finished the eyes that I looked back at the painting and saw Elizabeth, her daughter, in her. And it was then that I was convinced I had achieved a likeness of Anne, just as you would see her, smiling at someone in the distance, in the corridors of Hampton Court Palace.

Anne was great fun to draw, and I'm so happy to be able to show her relaxed, as a three-dimensional person and hopefully, with a good likeness of how she was.

Interested in my art? You might also like Sketching Historic Buildings or keep up to date with my artwork on Instagram. I'll be taking part in a historical-themed Inktober this year with a different prompt each day, so do follow me to keep updated.

Love the Tudors? Check out my recipe for Anne Boleyn's Tudor Apple Pie (she had a craving for apples, you know), Tudor Marchpane or others here in my Recipe Index.

You might also love these articles: How to Swear Like a Tudor, What Really Made Henry VIII Obese? and Lost Palaces of the Tudors.