The Tudors loved their cheese, didn't they? First we have Henry VIII being buttered up with a wheel or two of Parmesan in negotiations with the pope - and then I learn that Elizabeth I was partial to a block of crumbly, sweet Cheshire. 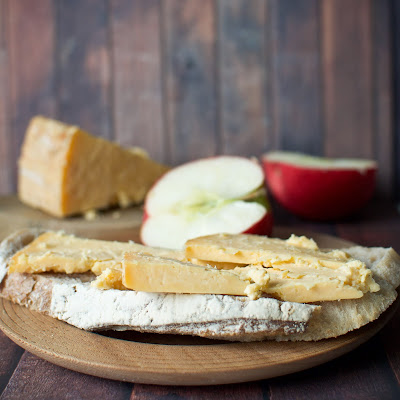 Writer Ned Palmer asserts that Elizabeth's Privy Council dined on Cheshire cheese in 1580, Roger Stephens said she did the same in 1590. (1) She even sent some to Ireland to provide sustenance to her troops.   In a letter to Sir William Knollys dated 23 September of that year, which begins 'Concerning the Cheshire Cheese sent to the forces in Ireland' George Beverley writes: "the cheese of this country is a victual apt and ready to be shipped to serve the soldiers in Ireland, and heretofore hath usually been provided in the winter season, to serve the soldiers for their victualling in Lent, when beef and other victual faileth." (2)

The Elizabethan physician and writer Thomas Muffet, in his Health's Improvement - or Rules Comprising and Discovering the Nature, Method and Manner of Preparing All Sorts of Foods Used in This Nation marks Cheshire cheese, along with Banbury's - as 'best; to which the Holland Cheeses might be justly compared, if their Makers could but Soberly put in Salt.' (3)

But what did 'best' mean to an Elizabethan?  According to Muffet, 'good Cheese is neither too soft nor too hard, too close, nor yet spongy, too clamy, nor yet crumbling, too salt, nor yet unsavoury, too dry, not yet weeping, pleasantly, not strongly smelling, easily melting in the mouth, and never burning as it is toasted at the Fire.' (4)

It's thought that Cheshire cheese was produced since Medieval times, and some go so far as to suggest it was made in Roman Britain. It definitely surged in popularity though under Elizabeth - a Queen who made it law that people would wear woollen hats on Sundays to boost the wool industry. Who imposed weights and measures and the regulation of ale houses. And who championed Cheshire's greatest export - its crumbly, sweet and silky cheese - by putting it on the plates of not only her soldiers - but also some of the most influential men in her realm while on her business.

Or if you want to find out more about the Tudors, have a read of How To Swear Like a Tudor!

3. Thomas Muffet/Moffett. (1553-1604). Health's Improvement Or, Rules Comprizing and Doscovering the Nature, Method and Manner of Preparing All Sorts of Foods Used in this Nation. 1746 edition.  p.221